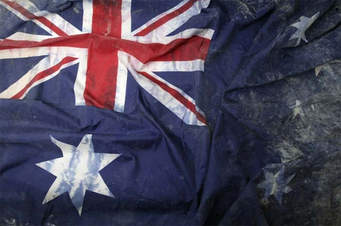 Tomorrow, April 25, Australia and New Zealand will celebrate ANZAC Day–Australia New Zealand Army Corps (for the American’s, it’s our equivalent to Veterans Day). It’s not just a holiday but an occasion where Australians and New Zealanders all over the southern hemisphere (and the world) will wake extremely early to attend one of the several thousand Dawn Service’s held tomorrow morning starting at 5:30am sharp.

This holiday means a lot to me. I am humbled and hold so much respect for the men and women who fought for their country on this ANZAC Day eve.

I remember having my first ANZAC Day and it didn’t have the same meaning to me as it did to Australians. I didn’t understand the importance of Gallipoli, in fact, I had no idea what Gallipoli even was.

The ANZAC’s attempted to capture the Gallipoli Peninsula in Turkey, a strategic position. The invasion did not succeed. Turkish troops waged battle with the ANZAC forces for eight months, during which over 8,700 Australians and 2,700 New Zealanders died.

The soldiers’ sacrifices and dedication to the cause roused admiration back home. “Although the Gallipoli campaign failed in its military objectives,” explains Australia’s government, “the actions of Australian and New Zealand forces during the campaign left a powerful legacy.”

People therefore held patriotic events in Australia and New Zealand, and as far away as Egypt and England, on the one-year anniversary of the landing, marking the first Anzac Day as a half-day holiday in 1916.

By 1941, the traditions were well-established when TIME wrote of the day:

In later years, for example during World War II, the memory of Gallipoli—as observed on Anzac Day—was used as a rallying cry to keep fighting even in the bleakest of circumstances.

Now, the dawn vigils are standard, marking the time the soldiers first landed in Gallipoli. People also hold marches, memorial services and play plenty of games of two-up (an Australian game of chance). This year, remembrances are scheduled at memorials in New Zealand and Australia, as well as across the world — including the Gallipoli peninsula itself, where buses will take early-rising groups for a 5:30 a.m. vigil.

Growing up American, I only really knew about American history…

Teachers and parents taught us how privileged we were to live in a free country and how our forefathers fought for all of us to have that right.

In our thirteen years of school, we got to our feet every Monday morning.  Right hand over our heart, facing the flag and quietly listening to the “The Star-Spangled Banner”–our national anthem. After the song finished, we recited the Pledge of Allegiance.

“I pledge Allegiance to the flag of the United States of America and to the Republic for which it stands, one nation under God, indivisible, with Liberty and Justice for all.”

Watch an American Olympian receive their gold medal. It’s moving and powerful the amount of respect all Americans have for our flag. The National Anthem kicks off all our big sporting events. The silence is deafening as thousands stand there, right hands over our hearts, facing the flag and listening.

I think ANZAC Day felt different to me because the rituals were foreign to me. For example, I’d never heard the ANZAC Requiem, nor had I ever sang, “Advance Australia Fair” or “God Save the Queen”. We don’t have the Last Post, Reveille, lying of wreaths and poppies were just flowers to me. There is a piper (bagpipes) and a bugler. The Lord’s prayer among other prayers are quoted, hymns are sung and reverence is present. I’d never heard of “Lest we forget” until I came here, but on ANZAC day it’s repeated over and over.

We have Veterans Day to commemorate all veterans in the US military. It occurs on November 11th to memorialize the Armistice which ended the World War I on that date in 1918. This is the same as Australia’s Remembrance Day. We also have Memorial Day on the last Monday in May that commemorates men and women who have died serving the United States. It was first instituted to remember soldiers who died in the Civil War. And we have Flag Day on 14 June which commemorates the official adoption of the US flag by the Second Continental Congress in 1777. It celebrates the history and symbolic meaning of the American flag and is also an opportunity to remember those who fight to protect it and the nation for which it stands.

We have 3 separate holidays which honor our men and women in the military and their contribution to a free country. But all of them combined is not as big as ANZAC day. Many hours are spent in organizing, preparing and executing the ANZAC Day events throughout the country. That is appreciated by all Australians.

A few years ago my husband and I got the opportunity to go to Washington DC. I had never been there before. There is something so special about seeing the places you grew up learning about come alive.

The White House, Lincoln Memorial, Washington Monument, Mt Vernon, and where Martin Luther King stood and gave his famous “I have a dream” speech on the steps of the Capitol. All the museums, The Smithsonian’s–I lost count but I think there are about sixteen of them.

There are so many Monuments and Memorials that it’s hard not to be affected.  Standing in front of the Vietnam memorial, I was transported to that moment long ago. It has bigger than life-size bronze soldiers walking in the rain and mud. Some are holding each other up while marching and others are laying in the mud, fallen with fatigue. You can see their faces, feel their pain. I was so overwhelmed it’s like these statues actually had beating hearts that drew me in, taking me to that time.

I have so much gratitude for all soldiers who have ever had the courage to fight in a war.

The night before we left, we visited Arlington National Cemetary. My heart broke as I saw acres and acres of gravestones.

It was almost too much to digest.

It had been a wonderful tearful adventure. I literally cried the whole week because I was so touched and humbled.

I was emotionally exhausted by the time we got to the airport to fly out. As we were waiting to board, I noticed a few men and women in military dress gather in the next gate over. A Freedom Honor Flight had just landed–A Freedom Honor Flight a non-profit organization that flies veterans (our heroes), who have never been to Washington DC before, to visit the memorials that stand in their honor.

Each military division was represented by current men and women who hold those military positions now. Then they started clapping as veterans were escorted and wheeled off the airplane as they entered the gate. Soon all of us at the surrounding gates joined in the clapping. I noticed all the people helping were wearing the same t-shirt that read “If you can read this, thank a teacher, but if you can read this in English, thank a Veteran.” I was so touched by all of this concentrated patriotism that the tears just streamed down my cheeks. I stood there, with a crowd of other travelers, crying and clapping,  watching over a hundred veterans being slowly wheeled, escorted under the arm and some of them walking themselves, come off that flight. It was truly an honor and a blessing to be there in that moment.

I’ve been living in Australia for 18 years now. I became an Australian 10 years ago in 2009. Since then, ANZAC Day has taken on a new meaning for me. We always go to the dawn service as a family and we always catch up with all of our extended family celebrating and honoring the glorious dead in a march at Dandenong RSL. We all get together to watch our own soldiers march with their grandchildren and great-grandchildren. In our extended family, we have 2 British, 2 Americans, 3 half American/Australians, 1 Canadian, 2 Canadian/Australians and 2 Australians. We are a melting pot.

I love that Australia spends the whole day honoring our men and women who serve and served their country –no matter where in the world they are. Respect is shown, and stories are shared. We especially honor the heroes who never returned. It’s a day for families to remember. Soldiers to remember. The world to remember.

Thank you to all of those who put their lives on the line or on hold and fought for their country, you are truly brave and we are truly thankful. You gave us the freedom to do what we want.

Let’s be thankful. Let’s not waste that freedom away, do something big with it. Be big and brave in your own lives. Move your own mountains! Lest we forget.

Published by Kaylynn Rasmussen – Confessions of a Serial Hugger

I grew up in Salt Lake City, Utah as a 5th generation Church of Jesus Christ of Latter-day Saints. I am a Mormon, but I was not always the proud happy Mormon I am today. Life sucker-punched me as a teen and I stopped listening to what was inside my heart. I am an American living in Melbourne Australia with my agnostic husband and two kiddos. This blog has been my recorded journey of finding my muchness again in hopes to help others in finding their own muchness. The muchness I am talking about is our gifts from God. We were all born with incredible treasures unique to only us. Our Father in Heaven loves us and misses us all every day—exactly how a parent misses their own child. You are a child of God. You are important. You make a difference in this unbalanced world we live in. Your life matters. After all, as Pierre Teilhard de Chardin said, we are spiritual beings having a human experience. View all posts by Kaylynn Rasmussen – Confessions of a Serial Hugger

8 thoughts on “Lest we forget–but first we must understand for those of us too young to remember.”

Let me know what you think of my post Cancel reply

Looking for something I wrote? Search below